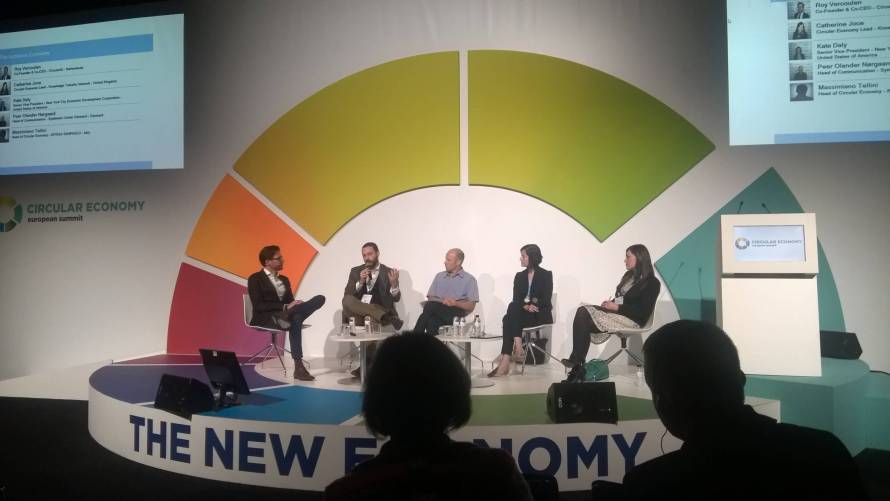 The Circular Economy became a main topic in Europe last years. The Circular Economy Package, released in 2015 posed this new economy as the model to be adopted by the whole European Union, when several governments have already made their decision by the signing to the CE100 program released by the Ellen MacArthur Foundation. Catalunya is one of them. Since 2013 the Govern de la Generalitat have joined this community to catalyze the transition towards a sustainable growth.

Barcelona, as a frontrunner in design and innovation decided to take the lead organizing the Circular Economy European Summit 2016. The congress was designed to be integrated in the Smart City Expo & World Congress, the most relevant event related to urban innovation global. Fira Barcelona organized the 3 days congress that was curated by EIG and Symbiosi. The Ellen MacArthur Foundation also collaborated resulting in a program of an outstanding quality where leaders from all around the Globe both public authorities and entrepeneurs, shared ideas, knowledge and barriers in the implementation of the new economy.

The Congress program was focus on the implementation of the circular economy in the urban context. The CEES talks were the space for the frontrunners to share their experience, with Dame Ellen MacArthur as keynote speaker, together with Antoinette Guhl (Deputy Major of Paris), Lewis Perkins (President of the Cradle to Cradle Products Innovation Institute), Iain Gulland (CO, Zero Waste Scotland), Marcus Gover (CEO, WRAP), Cecilia Bränstenn (Circular economy lead at H&M), Anton Brummelhuis (Sustainability Director at Philips Lighting) and Françoise Bonnet (Secretary General ACR+).

During each day several dialogue sessions were held, giving the word to many stakeholders. This multi-perspective approach gave the chance to explore the opportunities, tools and barriers that companies and authorities are facing in the current scenario.

Great discussions raised around the “Financing transition towards circular economy in cities” panel as well as “From ownership to service”.

During 2017, the CEES has been integrated in sectorial events organized by Fira, as the circular economy is a cross-sectorial concept.

Would you like to make a positive change? Let's talk.